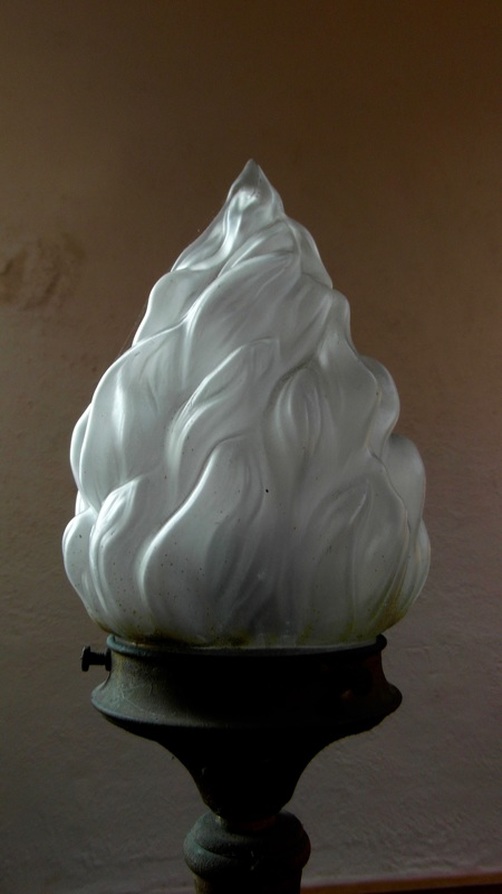 I’m interested in the psychic materials of acoustics, and that a musical instrument - a bass clarinet has had a former life carved from the density of a tree.

In Alexander Porteous’ book The Lore Of The Forest - a collection of myths and legends first published in 1926, the author illustrates how deep the subject of the forest is embedded in our common folk lore. It resonates with our distant past finding its way time and again into children's stories, into songs, across many different cultures. But the poet Robert de Wace also gives us a candid telling of his own apprehensions - a demystification of sorts. During visits to an enchanted forest called Broceliande in Brittany the twelfth century poet complains:

So will all this intrigue lead to nothing? The foolish poet reveals the truth of the matter. He sees the forest and the earth precisely for what it is, and nothing else. It’s plain and simple - despite his apparent humiliation. It must be in the eye of the beholder (or the ear as Lol Coxhill would lead us to believe).
​
I’ve had a fascination for the earthy, dark-wood sound of the bass clarinet ever since I first heard the wonderful duo recordings of Eric Dolphy and bassist Richard Davis. A shimmering, fragile version of the jazz standard Alone Together appears on Dolphy’s retrospective Memorial Album of 1964. The music is intimate quiet and exploratory, it feels private. It’s as if the two instruments have morphed into a shadowy world where the shape of a recognisable ballad is not completely lost but is thrown into a kind of primal relief. Another early influence on me was the discovery of a cassette tape of Japanese Noh music. That was probably the first time I had heard anything which used uncomfortably long durations - seemingly eternal gaps between musical phrases. It was obvious that there was more than just music going on here. It’s of a ritual nature although something crucial was missing from my casual listening experience. I appreciate now that the Noh cassette was detached from any visual reference points, from the movements of its mystic characterisations and theatrical context. But this music did allow me to consider different time frames and to approach things away from formal progressions of rhythm and melody.​ 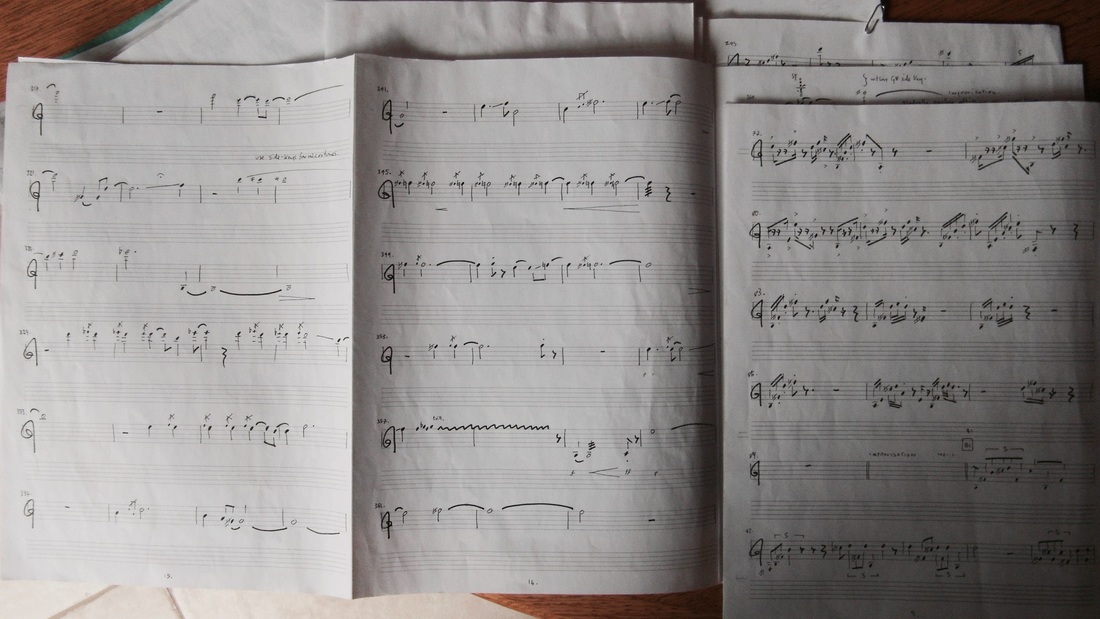 excerpt 1.
Most of my recorded output over the past sixteen years or so has focussed on free improvisation and so I wanted a change from that. When Mark Wastell from Confront Recordings suggested I put out a solo record I had already been formulating ideas during long periods of working in pop music and from acting as an accompanist for a variety of songwriters including Little Annie, Baby Dee, Ladan Hussein (Cold Specks), Timber Timbre, Devon Sproule, Edd Donovan, and Fyfe Dangerfield. The aim was to write a piece of popular music for solo bass clarinet, and this started to resemble a series of naive folk dances. I began writing out variations in February 2016 using a jumble of minute long sketches I already had lying around. Some of the sketches were just oblique melodies that were written between shows I had been playing in Montreal the previous year. These established the basic threads that I needed and I gave myself a set of rules about how to break things down, turning them into a series of fragmented rhythms. A simplicity in the writing soon became exaggerated as I started to explore pinpointed phrases and staccato voicings. Smaller passages began to take shape from within by reducing melodic lines sometimes to a recurring series of just two or three notes. This is evident in the two Upnor Dances which both pivot around a recurring string of high F-naturals and B-flats. It was all a very playful and pretty random approach to composition.

The result is a combination of cyclical themes, made-up folk dances, and invented improvisations. On the most part I wrote it out in a very conventional fashion - but the score is filled with interruptions. I wanted to create windows of opportunity where I could also expand self-developed playing techniques. These moments sometimes use modular fragments and compound rhythms but otherwise the playing is allowed to open up and become quite free. They also help to throw exuberant measures of time and metre into altered states. Improvisation allows a more tactile relationship with the instrument and I can conjure distortions in the music which I wouldn’t want to contrive through extrapolated notation techniques or complexities of writing. In this sense the music is allowed to breath. There is something magical about a performance where you know it will never be heard exactly the same way twice, it places you in the moment. ​ 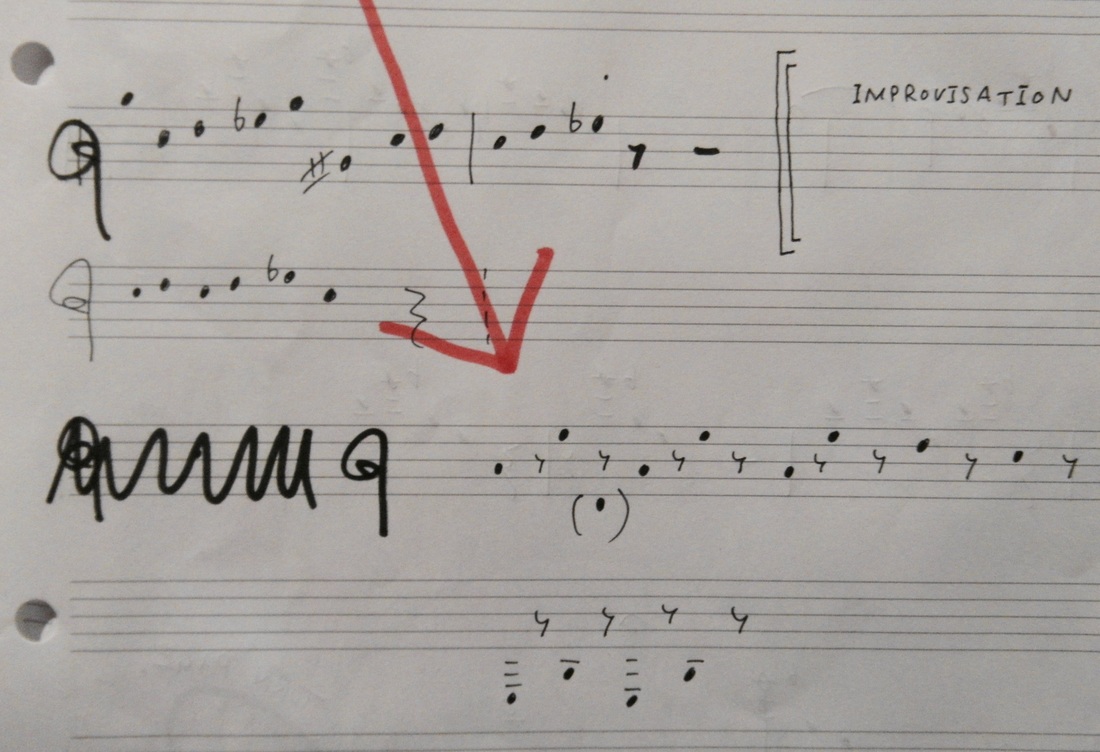 excerpt 2.
Some of the titles were taken from Alexander Porteous’ The Lore Of The Forest. Higher Lift Thy Branches refers to a Serbian ballad telling of magical dances or roundels that take place under the cherry tree. When We Root Up The Larches refers to superstitions of felling or rooting up of trees during particular phases of the moon. Other titles I’ve just made up. Some allude to landscapes or places that I know such as Upnor which is an enclave off the Medway estuary in Kent near to where I grew up. Puzzle Wood is in the Forest of Dean not far from where I live now. Other titles are descriptions of things that I have imagined might inhabit forests and they hint at an imagined narrative.
Working with recording engineer and musicologist Chris Trent the session took place on a September afternoon in 2016 at the Cheltenham synagogue which is only about a two minute walk away from where I live. It’s a small room with an intriguing interior dating from 1761. The room itself has a former life as all the original Ashkenazi furniture is eighty years older than the exterior of the building and was taken from an older London synagogue being rebuilt at the time. As I was recording this piece I was very aware of a kind of dual space - the double history of a sacred room and the open ended interiors of the score. For previous recordings I have used churches that have larger rooms than this but I chose this space because of its bright crystal clear acoustic. The room was purpose built for a single voice and things don’t get lost in floods of echo which allowed me to get as close as possible to the fundamental tones and colours of the instrument while I was recording it - and without the dry environment of a studio or having to work against the clock. I was basically locked in the building for a day while I did this. I could leave the synagogue but to get back in I would need to call someone out to open the door again. It certainly added a bit of tension to the situation but I knew I wasn’t going to have any intrusions from people wandering in on me. 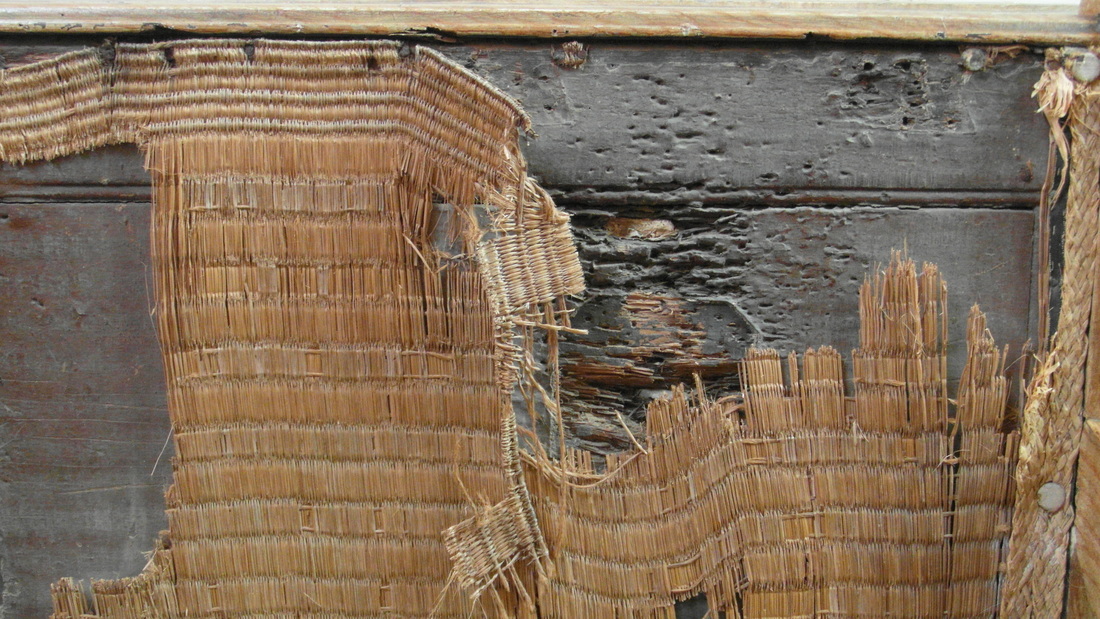 Ashkenazi furniture dating from 1761.
Many thanks to Mark Wastell, Chris Trent, Jenny Silverston and the Cheltenham Hebrew Congregation. The Disruptive Forest is available now through Confront Recordings: http://www.confrontrecordings.com/chris-cundy-the-disruptive-forest